First love, first heartbreaks and the art of letting go, you learn it first from your pets.

It was the 80s and I was in the place where summer classes were unheard of. And even if ballet lessons were offered, I wonder if my mom will enroll me. So when I received this pup that summer, it was a delight! It meant permanent playmate. First pet, first love. Barbie accompanied me day in day out even during the very limited time I was allowed to play in the streets. Suddenly I had one to be with me all the time. Only one thing pissing off the adults in the house… all our electric plugs were chewed off… not a single lamp shade was spared. All slippers were marked by her tiny teeth or just anything that she can chew. And the last straw was my grandfather discovering she loved sleeping in his cabinet, in between his clothes. Grandfather has no choice but to put her in chains. And one afternoon after school I found her lifeless with chains around her neck. That was my first heartbreak and I never recovered.

A got sick and King never left A’s room until his recovery. Some kind of a love.

My mom had him for 8 years and they share this love that words are not enough to tell the story. I would refer her as my Mom’s dog. I haven’t recovered from my own loss so there was a distance. He had glorious days though before old age and scabies, but I will remember him most for his anecdotes. One, he almost bit the ‘ding dong’ of our male boarder, which this teacher retorted: “I haven’t even used it yet and you’re chewing it off?” while holding his treasures running for escape. I didn’t remember him getting shots though. Whity would accompany my mom literally everywhere she goes even on Sunday mass that he already got identified with her. On his last years, he developed scabies and did not heal anymore, we advised mom to put him in chains to restrain him from following her in the church as he was already scaring the whole town. And put she did. Only that she chained him in a garden chair made of steel. The opening song has not yet started, but outside the people in our street were waken and scandalized by the sound of the steel chair outrageously dragged by a running dog on his way to the church – on an early Sunday morning. A distant relative from the other end of the block recognized Whity and dislodged the chair from him. The scene ended with my nephew carrying the chair on their way home with all of them laughing so hard they could pee. But that did not make mom love him less.

I would always say this: always relaxed and poised in any situation, there was only one time I saw A panicked – when Sugar got sick. After taking him to small vet clinics near his place she just didn’t get better that made A obviously worried. He eventually decided to take her into an upscale vet clinic that quickly diagnosed her with Pyometra, an infection of the uterus. It was quite a sum he spent saving the dog. Twice I visited her while she was confined to check on her condition. She didn’t recognize me of course, she’s A’s dog. But when A came to visit she turned around as quickly reaching for A’s hand touching the cage. Sensing A leaving, she would make this sound like she was crying telling A how hurt she feels… It was another sense of attachment that you will feel between the owner and the pet and your heart will swell. It was 30 days after, A was reversing the car, didn’t notice she was underneath and the next thing in front of him was Sugar in a pool of blood. The world dimmed.

The wonder drug Lactobiotic Lactovital. Just when I thought I will never fall again along came this golden lab. It was mine and A’s decision to buy her. What a ‘flirt’ but you will love her nonetheless. She moves, chews and jumps tirelessly that when one day she stopped eating, I was alarmed. I took him to local vet who diagnosed her by looks, no tests at all, uhmm, he took her weight and her temperature, if those count. The next best decision was to take her into a reputable vet clinic in Manila after fever never left her at all. After series of tests she was diagnosed with Dog Parvovirus. She was in IV and confined for a week. Bills hiked up and I just prayed Mom won’t rise from her grave and slap me with senses.  She went home to A’s house with a bag of medicines and etc… she didn’t seem better though except for increased blood count and a new veterinary vocabulary for us. I was looking somewhere for Canines Health Insurance Company. Phew! A’s mom nursed her for a couple of days with meds to be taken every 3 hours and a special diet. Her heart sank seeing nothing improved after another few days. Tyra would just slouch and can’t even bring herself move more than an inch. I learned how to pray earnestly. A’s mom won’t give up though, not ready for the thought of seeing Tyra die in front of her. So she took the matter in her own hands and gave her Lactovital. Each dose or maybe the taste made her scream to her lungs but she continued giving her everyday! Miraculously, she slowly recovered! I was never a fan of supplements, but this story was an exemption and makes A’s mom a Supermom! 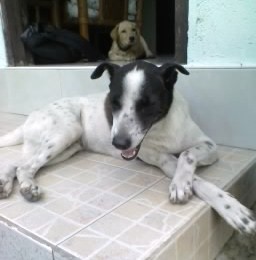 A love that has suddenly grown. When I took Tyra home Dugong had become suddenly territorial. While he lead the pack of askals in our barangay, he saw Tyra in the light of an enemy and competitor. He did not leave the house for 2 days guarding the kitchen door preventing the pup from getting inside. He would growl whenever Tyra gets close. As if very possessive, he will jump on me and put around his feet around my waist that no other dog can get near. For one, Dugong is quite protective. He would walk with us to the bus station at any hour and won’t walk back home until our own bus leaves. If we go home, he was the first to welcome us jumping on his feet with gladness. I was away from home when he left but it still broke my heart into pieces.